The bank said 70.8% of all short-term loans were owed by financial institutions.

Official figures also revealed that the private sector's long-term external loans amounted to some $210.2 billion as of March, marking a $127 million hike compared to the end of 2018.

The bank said liabilities of the financial institutions constituted 48.9% of the long-term foreign loans.

Regarding the currency composition, of the total long-term loans in the amount of $210.2 billion, 60.9% consists of U.S. dollar, 33.7% consists of euro, 4.1% consists of the Turkish lira and 1.3% consists of other currencies.

By the end of March, principal repayments of the private sector's total outstanding foreign loans were $60.4 billion for the next 12 months.

Turkeys current account gap narrows in March Turkey's current account deficit has dropped to $589 million in March, decreasing by $4.14 billion compared to the same month in 2018, the Central Bank of Turkey (CBRT) said on May 13.

The figure was nearly $4.73 billion in March 2018, according to the Central Bank's data.

"This development in the current account is mainly attributable to a $3.7-billion decrease in the goods deficit recording net outflow of $916 million," the bank said in its report.

The European Bank for Reconstruction and Development (EBRD) expects gradual recovery in the Turkish economy in 2020 after the start of a recession at the end of last year which is expected to result in economic contraction in 2019.

In its latest economic outlook, released yesterday, the EBRD said the Turkish Lira’s depreciation and high interest rates will continue to dampen consumption and investment, although exports could make a positive contribution to growth.

According to the development bank report, private sector debt reduction - or deleveraging - means that the economic recovery will be slower than in past crises, when credit growth stimulated recovery.

The EBRD report added that leading indicators suggest that the slowdown may have bottomed out in the first quarter of 2019, but adds this may in part be a result of temporary counter-cyclical measures introduced before municipal elections in March 2019.

“Despite a stabilization of the lira in the wake of high volatility in 2018, the currency remains highly vulnerable to fragile investor sentiment,”

“Inflation in Turkey is expected to remain high for the first half of 2019 after hitting a 15-year peak of 25 percent in October 2018. Inflation is likely to start to decline gradually in the second half of 2019 as the impact of last year’s lira depreciation recedes,” it argued.

The Turkish Central Bank on April 30 kept the country’s year-end inflation forecasts at 14.6 percent this year, 8.2 percent next year, and 5.4 percent in 2021.

As laid out in the new economic program announced last September, the Turkish government’s inflation rate target is 15.9 percent this year, 9.8 percent in 2020, and 6 percent in 2021.

Meanwhile, the European Commission said on May 7 in its spring forecast report that Turkey’s economy is rebalancing.

“The correction of external imbalances and of past high credit growth leads to a contraction of domestic demand with a return to growth expected for the second half of 2019,” it noted.

According to the commission, a strong contribution of net trade, reflecting mostly a high income elasticity of import demand, dampens the shock to the domestic economy.

The report argued that financial conditions are expected to remain volatile in the first half of the year with interest rates and stock markets entering a more tranquil phase later in the year.

The commission predicts that the Turkish economy will contract 2.3 percent this year but it will rebound to achieve growth rate of 3.9 percent in 2020.

In its economic program, the government forecast a 2.3 percent GDP growth for this year and 3.5 expansion in the economy next year. 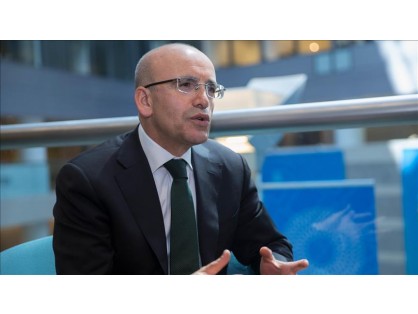 Simsek met with more than 100 global investors as part of the current Spring Meetings of the Boards of Governors of the International Monetary Fund and the World Bank Group in Washington between April 16 and 22.

"We had the chance to discuss Turkey’s economy and reform agenda after presidential and parliamentary elections” set for June 24, Simsek said.

A reform package of over 100 articles -- -- designed by the Coordination Council for the Improvement of the Investment Environment (YOIKK) -- to encourage investment in Turkey was sent to parliament on Jan. 30.

Some 35 articles were approved and published in the Official Gazette on March 10.

The reforms aim to simplify the process of setting up companies, getting construction permits, foreign trade, doing research, and bringing in investments.

He gave Mnuchin information on how Turkey has a foreign trade gap in iron and steel production.

Ankara is in touch with the U.S. over its decision to impose tariffs on steel and aluminum imports, Economy Minister Nihat Zeybekci said on April 5.